You are here: Your Home *** Medication *** Codeine Deferral

Last month, the Department of Health's medicines scheduling delegate made an interim decision to support a proposal to re-schedule combination analgesics and cold and flu remedies from Schedules 2 and 3 (pharmacy and pharmacist-only) to Schedule 4 (prescription-only) analgesics.

This has been very unpopular with consumers with 127 public submissions and with only 14 of those in favor of the up-scheduling of codeine analgesics.

In an announcement from the Therapeutic Goods Administration (TGA) this morning, the delegate has decided to defer making a final decision until next year due to the large number of submissions received, the majority opposed to the proposal.The deferral of the decision will allow the delegate the option to seek further advice, including from the Advisory Committee on Medicines Scheduling (ACMS) at its March 2016 meeting, prior to making a final decision, which will not be before June 2016.

While there is ample evidence that codeine is being abused by a minority of consumers, it is up to the Pharmacy peak bodies of the Pharmacy Guild and Pharmaceutical Society to implement a better self-regulation policy. I feel the majority of Pharmacist will agree this, with exception of the "Big Box" Pharmacies. They generally do not belong to those peak bodies and encourage their young pharmacists that a patients health comes a poor second. 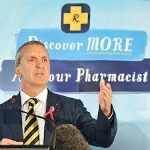 National President of the Pharmacy Guild, George Tambassis, says the Guild maintains there is a better way to address the incidence of abuse and dependence. “The Guild will move quickly to implement a real time recording system for codeine sales, as recommended in our submission to ACMS,” the spokesperson said.
“This system will help identify consumers potentially at risk, and provide clinical referral pathways. The Guild also supports mandatory front-of-pack warnings about the potential for addiction, and increased consumer education about the risks.”
Lets hope that common sense prevails.