You are here: Your Home *** Healthinfo *** Discipline is not Punishment

Discipline is not Punishment

The word discipline comes from the Latin word to teach, as in disciple.

Discipline is not punishment, it is teaching your child to be responsible for their behavior and their own actions. The most
effective technique is to both constant and to teach your child that there are consequences for actions. The ultimate goal is to encourage responsibility for their own actions; this includes teaching the child to learn to both manage their feelings and behavior. This is self monitoring.

Children can only learn by example.
It is therefore important that parents learn to control their own behavior in front of children.
* That includes trying not to unnecessarily raise your voice, drink alcohol and smoking in front of children. *
The best form of discipline is positive encouragement, reward children for good behavior. Ultimately physical punishments such as hitting, smacking and verbal abuse are negative feedback, and it also sets in motion the idea that it is OK to use violence to solve problems. If you must use verbal violence or smacking it should only be used as a last resort.

Physical violence with children can cause other problems:
* It can damage the important parent-child relationship.
There can be consequences of using violence with children:
* The child may distrust the parent and it impairs future relationships with a spouse or their children. One generation's problems then become transferred to the next generation.
* Children subject to violence often have their self esteem damaged and then become subject to bullying or worse a perpetrator of bulling behavior.
* When physical or verbal violence occurs it becomes the main focus of the child, not the bad behavior.
* When, in the child’s eyes, the punishment is out of proportion to the behavior, then their sense of justice and fairness is destroyed.
* Physical punishment can encourage children to tell lies to avoid punishment. It then becomes a bigger issue of truthfulness and behavior.

Children generally do not mean to misbehave and therefore have many reasons:
* They may be too young to know that their actions are unacceptable.
* They may be angry and frustrated and are trying to express their emotions.
* They may be psychologically stressed because of a family break-up or domestic violence.
* They may misbehave because it is the only way to get attention. Negative attention is still better than being ignored.
* The child may be trying to punish you for neglect!
* Children who are being too constrained or bored.

It is important to discipline your child, not by just punishing the child, but by showing that what is acceptable behavior.
Young children under 3 years do not know what is right or wrong, so a constant repetitious enforcement of the right behavior is necessary. Try to explain things to children in their language terms as they act out their feelings through behavior:
- Show what to do rather than punish.
- Explain the correct behavior.
- Use constant so that correct behavior is imprinted.
- Be understanding of what children are capable of at that age. Example: All toddlers are messy eaters.
- If you make a threat, make sure you carry it out - idle threats reinforce bad behavior.
- When children are older let them be a part of the family rules. 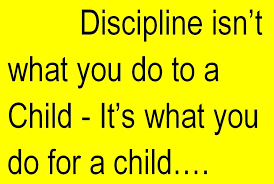 Consequences should be part of learning discipline.
Clean up the mess or toys will get broken, your poor mother will have to pick them up, or you will trip over them.
Tidy up or you will not be able to find your toys.
Give a child time out when they are aggressive or not playing well with others.

A child naturally wants love and approval from their parent, so one of the easiest ways to encourage good behavior is to let them know what is expected of them and encourage them.